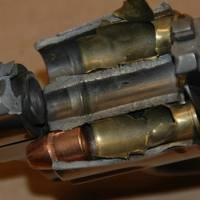 These past two years have increased new registered firearm sales over 14,000,000 in volume. When I drive by Miller’s Gun Shop it is always packed with cars. When people start to buy firearms, either rifles or handguns, maybe shotguns too, they require ammunition. This is the crux of our current article and whether you are an experienced shooter (All men say they are from age 12), or a novice (usually women say this), you need to read and heed – it may save your life and limb.

Firearms are usually based on military design, and when in the civilian market the military ammunition calibers predominate. Today in varied configuration the .223 ammunition is the top sales interest, probably followed by the 9×18 Luger and the venerable .45 ACP. What you choose is based on your intended usage, and if you use modern USA Manufactured Ammunition and Firearms you are safe.

However many with good intention, and less to spend, purchase foreign made war surplus rifles and handguns, or replica made rifles and handguns from dubious Asian, African and European (former West Bloc Countries) sources via the internet, neighbors, gun stores; who knows where. The original war surplus firearms are usually worn out barrels and loose receivers. These are usually undetectable corrosion eaten firearms that are ready to crack open and blow hot residue back in your face. Replica firearms that look new and shinny are inherently inaccurate. After a few heated rounds of firing the barrel droops –this indicates low quality metal from China, or worse yet –metal from India.

If you inherit Granddad’s World War firearm, be advised that metal pressure standards (SAMMI) have changed over the years and may not be in accord with modern ammunition, which is forever seeking higher and higher pressures. Most of these old firearms in the closet were fired with corrosive primers without being properly cleaned. Subsequently, the firearms become unsafe. What you inherit and intend to shoot is best appraised for safety recommendation by a qualified gunsmith that is recommended by a major manufacturer such as Browning, Remington etc. There are many garage unlicensed (BATF) gunsmith want-to-be’s who may have talent for light work but not pressure testing.

There is a proliferation of AK’s, SKS etc. in the market place today. Beware!

Now for the thrust of this article: Ammunition. You will need ammunition. Buy quality ammunition from major USA manufacturers such as Hornady, Winchester, Remington, and Federal, –these are all closely regulated, tested and warranted to standards of the industry. True, the price is higher, but your safety and bull’s-eye accuracy make up for the poor showing of cheap ammunition.

There are reloaders, often selling shell cases, and bullets, boxes, and books may just be incompetent, or make mistakes, getting old and can not see well (like me) thereby offering unreliable ammunition. Although this may be your cousin Willie in the basement for their past 40 years – avoid his wares. Reloading ammunition is precise and dangerous for the reloader as well as the user.

The big sales are old out of date military ammunition, repackaged, and sold in catalogs, gun shows etc. This is the most dangerous.

Although we read about gunpowder and assembled ammunition dating back – in storage- still viable after decades of time in some Iranian cave that you can buy for pennies and shoot in your new Browning 30.06 – you become all excited with this bargain. The advertisement states it is from 1950’s manufacture, corrosive (of course) and in good condition.

Corrosive mercury primers (that silvery button on the base of the shell casing) for civilian firearms went off the USA shelves in the 1930’s and the USA military stopped usage of the mercury primers in 1954. Billions of these ammunition units still exist in caves, warehouses, country store shelves and Granddad’s basement storage box right in front of the bottle of Jack Daniels.

Keep in mind that foreign governments also made ammunition decades ago in the USA caliber military firearms and in their own calibers for their AK’s, SKS’ etc. The type of primer quickly defines non-USA made ammunition. The USA uses Boxer Primers and foreign Governments still use Bergan Primers. The Bergan primer has the distinct advantage that partisan anti-dictator groups cannot reload these shell casings as it takes specialized tools to remove the spent primer. Here in the USA when the neighborhood reloader is gathering up spent casings he may think he can drill out the spent primer and insert a Boxer USA primer. Not so. The pressure in the firing cartridge with an improper seated primer will blow out and take your eyes with it. There does exist the possibility of obtaining the proper tools for removal of the Bergan primers from “The Old Western Scrounger” on the Internet.

Bergen primers are corrosive, non-removable and an indication of potential corrosion.

Modern ammunition does not use mercurial primers. Old ammunition does. So when you see that bargain, read the description very carefully and if it is dated, Bergen primed, corrosive – AVOID IT!

Corrosive ammunition eats the throat of the rifle barrel and the barrel itself. You need to clean it out after use with a ammonia type bore cleaner such as what is sold in old Army bore cleaner cans. Check your Army Surplus stores, gun shops and your rifle manufacturer for recommendations and procedures.

When finished cleaning properly with a swab, run a few dry patches through. If there is no green shininess, finish with a patch of Hoppe’s # 9 in the bore. Corrosion will be covered up by the copper sleeve on the bullet passing down the barrel at firing leaving rusting out the rifleing. If you shoot 10 rounds, clean it!

In summary: You just bought a $1800.00 new rifle or a $700.00 handgun and then to save money you purchase steel cased, corrosive powder and corrosive mercury primed ammunition. This is unsafe for you and your new firearm.

Avoid all the foreign cheap replica and obsolete military firearms as their rifle barrels are eaten away, under the copper plating, with corrosion.

Avoid any and all “bargain” ammunition that is military and that includes modern USA made surplus ammunition flooding the market today as this is generally out of specifications for civilian firearms.